The Santa Barbara New Model Army features a one-piece frame enclosed by a top strap over the cylinder compartment. The added strength imparted by this solid construction allows the shooter to use fortified powder loads.  Of course, one needs to heed the upper limits for black powder loads. Only a common screwdriver is required to disassemble the “Remy” into 28 separate parts. The front sight, the cocking spring, and the barrel are generally not removed from the frame. The threaded end of the octagonal barrel screws into the frame to form a rigid unit. Through the front under the barrel runs the base pin. It goes through the cylinder center, acts as an arbor to support rotation, and is secured in place by the loading lever set below it. 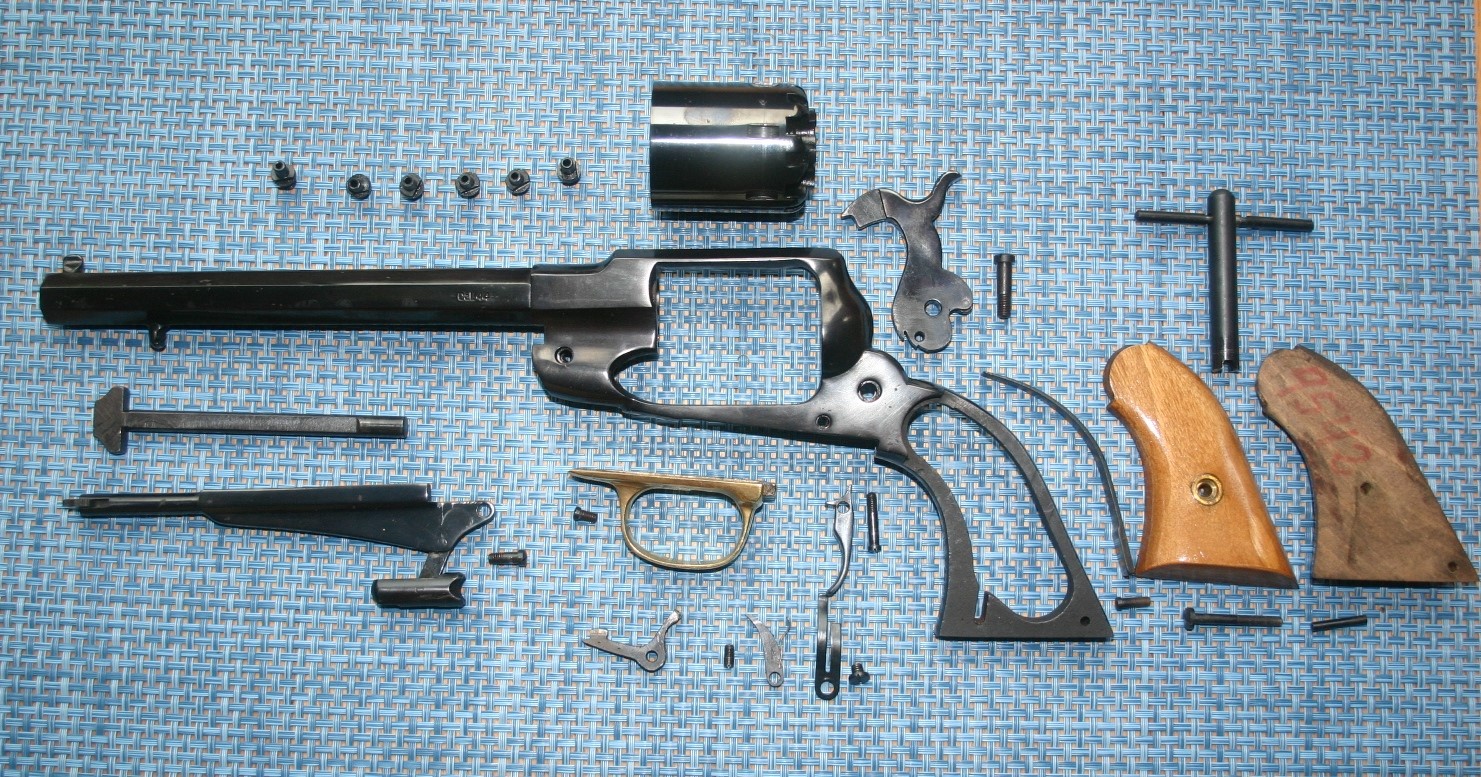 Santa Barbara in his seperated parts

The cylinder has hammer stops set between each of the six chambers. These flat spaces provide room for the hammer to rest, and prevent it from firing a chamber if the revolver is dropped or the hammer is struck. The Remington New Model Army is the first muzzle-loading revolver to introduce this safety feature.  The front sight sits on a swallowtail base which is swaged in place on the barrel flat. The pivoting end of loading lever has a fork-shaped latch. Spring tension holds the lever and plunger assembly in place during firing.

Operation of the Parts

In principle, a firearm always should be treated as if it were loaded. The barrel should be pointed downward toward the ground when it is handled. One should avoid taking aim at man or beast for practice.

The revolver should be wiped free of oil before loading.  Then, to begin loading, the hammer is pulled back by the thumb to set on the first rest. This position overcomes some of the tension of the main spring.  Rearward motion of the hammer pushes the cocking bolt upward to engage a cylinder notch, turning the cylinder to the first loading stop. Simultaneously, the cylinder stop presses down against the cylinder stop spring, locking the cylinder firmly in place.  Now the first chamber can be loaded with powder, followed by a felt wad to hold the propellant in the chamber.

Now the lead ball follows atop the wadded powder. When the loading lever plunger presses the slightly oversized ball into the chamber, a fine lead ring sheers off, forming an air-tight seal for the ball.  To prevent sparks from jumping from a fired chamber to ignite another, a sealant such as Vaseline should be used to coat the balls. This can be done quickly at the end of the loading sequence. Meanwhile, the cylinder can be advanced now to another loading stop without having to move the hammer. When the cylinder is loaded properly—for extra safety the sport shooter always loads only five chambers—the firing nipples can be fitted with a percussion cap.  Care should be taken to put the cap on straight and to seat it well.  Avoid any attempt to beat the cap onto the nipple, for such misuse can fire the exposed cap and damage the nipple.

The shooter now takes aim to fire the first shot, squeezing the trigger with steady pressure to the rear. The trigger squeezes against the tension of the cylinder stop spring.  Continued pressure on the trigger frees the hammer. Moving downward under tension from the main spring, it falls against the percussion cap. The force of this contact ignites the explosive fulminate charge inside the cap, sending a jet of fire flashing down through the ignition port of the nipple toward the powder charge. The entering flame sets the powder ablaze. The resulting combustion within an enclosed space rapidly multiples the developing high pressure.  As the pressure increases, its expanding force seeks to escape along the path of least resistance.  Speeding toward release at the muzzle, the pressure wave pushes the lead ball down the barrel.  As the ball continues toward the exit, spiral lands and grooves machined in the barrel spin the ball around its own horizontal axis. The centrifugal force thus imparted stabilizes the projectile flight path as it exits the barrel.  The fixed sights adjust for arc of the bullet’s trajectory toward the target. Thus assisted, a well-aimed shot can penetrate the center of the bullseye.  This sequence can be repeated until the last chamber is fired empty. 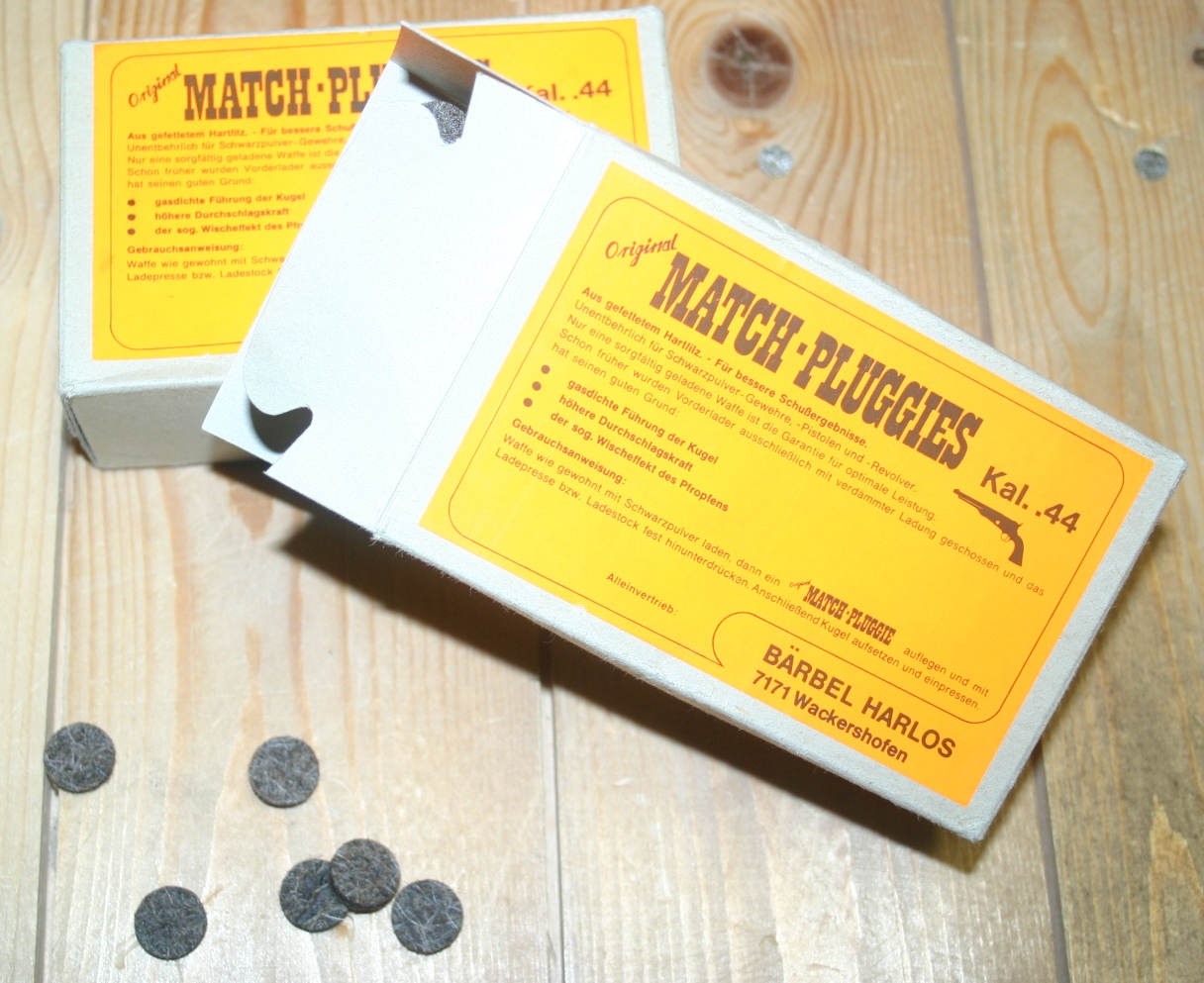 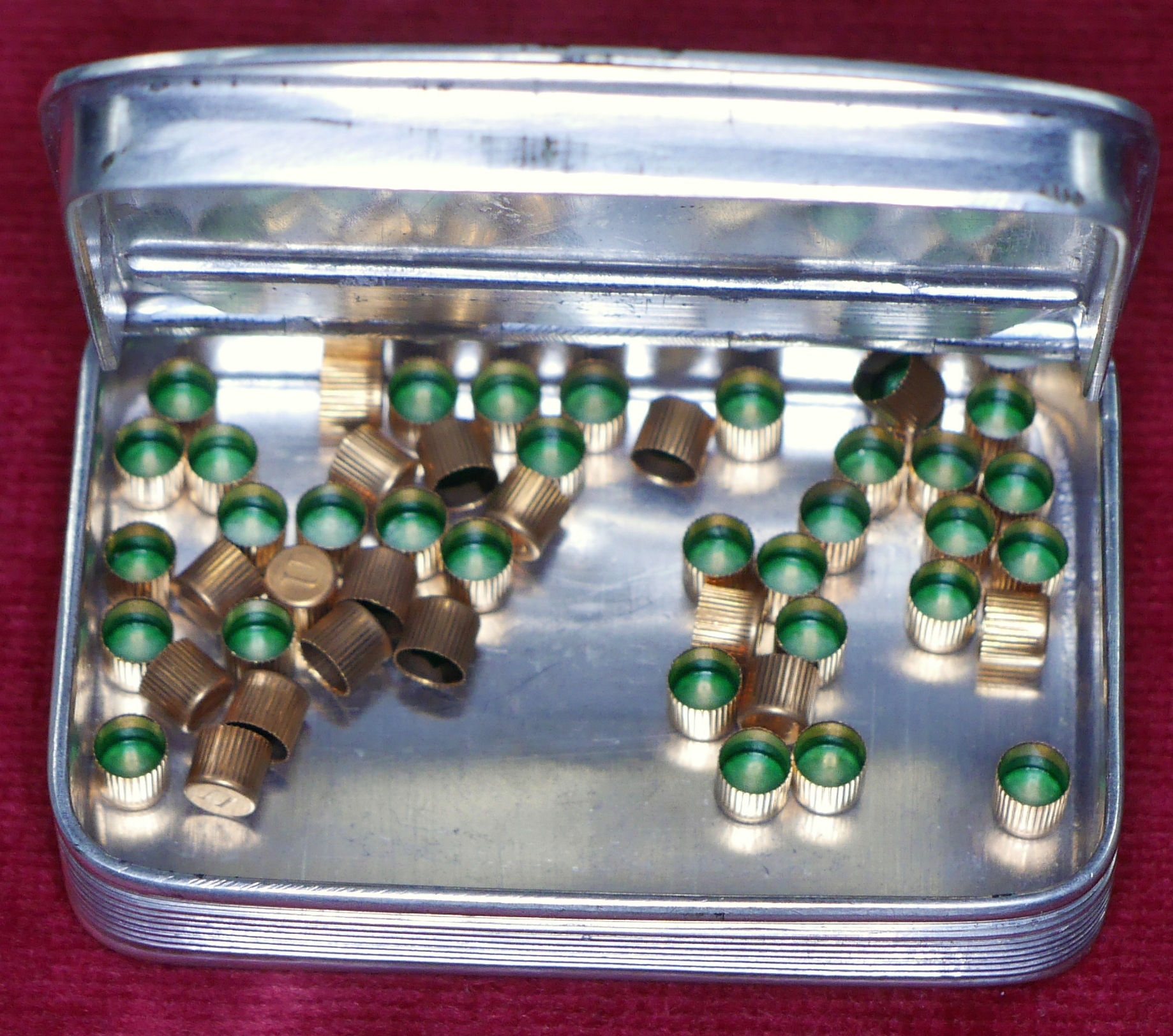 Is the bead in the dove tail, screwed or glued?
The prime secret of the sight bead can be disclosed now. For our project, I removed a sight bead from an inoperative Plain Jane. Or in other words, the barrel was cut off and the bead thus so exposed that the connection became apparent. 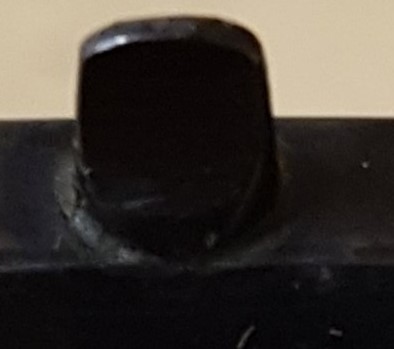 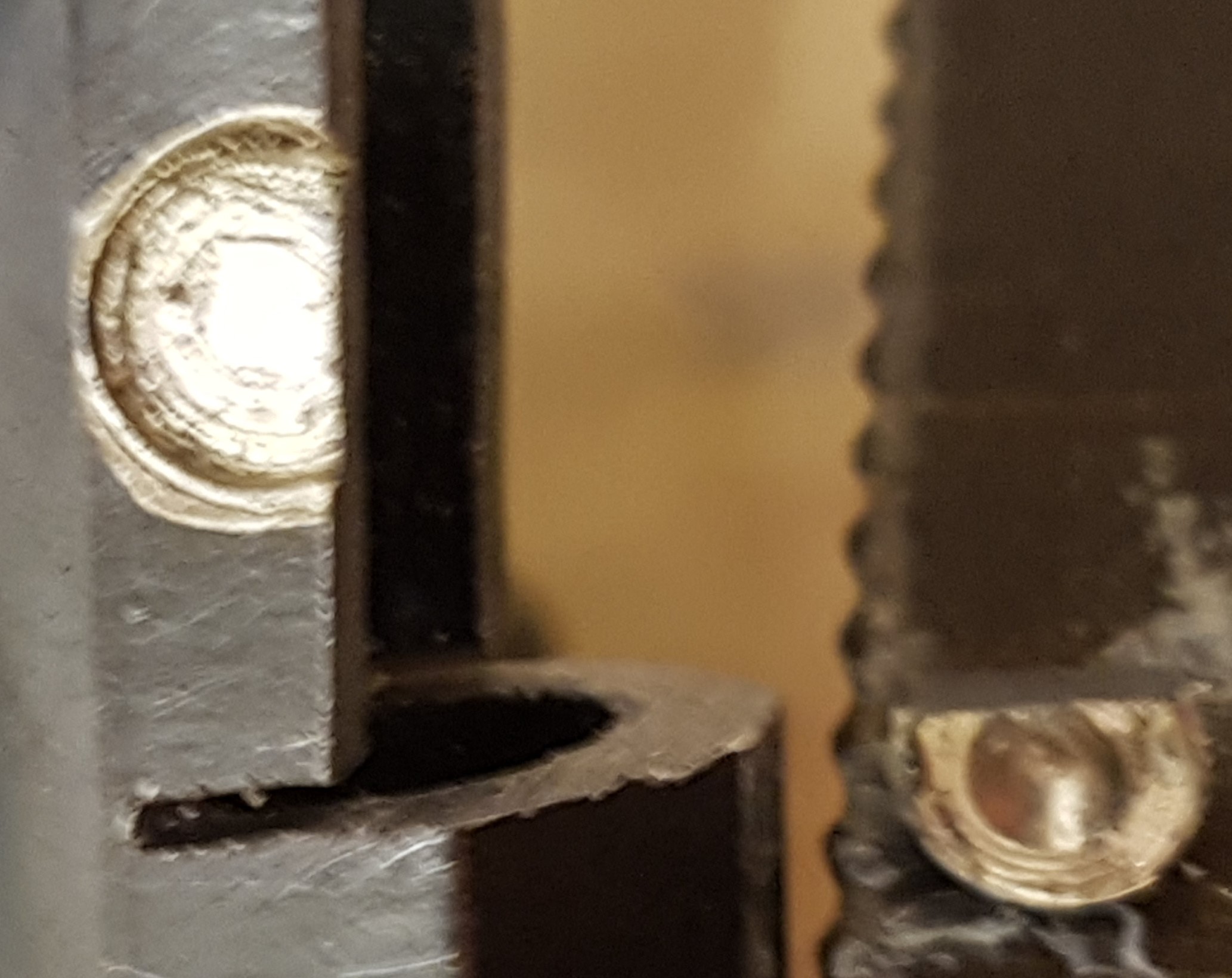 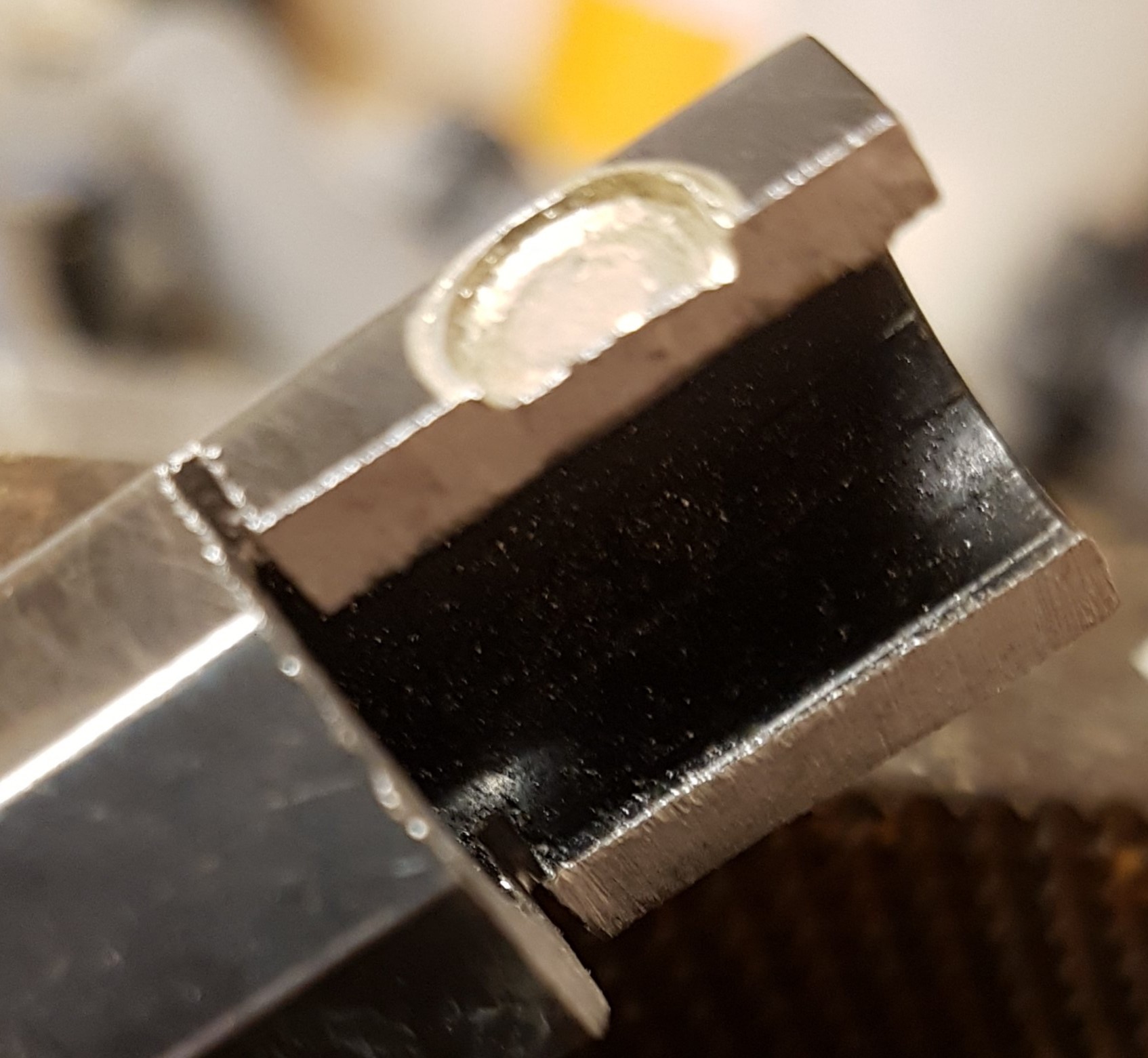 The sight bead was soldered in place, as is evident at first glance. To have the sight run parallel to the bore, a round hollow, shown here, was bored out.