Markings on the New Model Army

What makes a firearm really so interesting for a collector? Especially when several thousand examples of some models are produced and brought onto the market.

Today, amateurs can scarcely comprehend this question.  But it makes the collector quite uneasy when a firearm surfaces with an unusual marking.

Factory markings, as prescribed by law, were in any case always interesting to the arms collector. But what is involved with importer markings, country markings, or the marking or stamp which is reversed or ill-applied?  Do these factors make a firearm more valuable or even more uncommon?

The markings of the “German” were always painstakingly applied and on the same place. One could count on that. But in the eastern countries the marks rather looked as though they were made with improper hammers or by fellows made too powerful by a 12-pound hammer in the hand to stamp in a number just a few millimeters in size.

We find marks and numbers both struck and engraved. The engraving can come from the hand of a master engraver or be done by a hobbyist with an electric pencil from a hardware store.

He we want to present exclusively the markings on our Santa Barbara revolvers, for to try to show all markings would easily burst the limits of the study. We address here just those markings not depicted already under the Plain Jane rubric or in another way.

Since the European Agreement regulates the arms proof marks of member nations, we need not look for German markings stamped on a Spanish or Belgian New Model Army.

During the production years of the Santa Barbara, the appearance of the stamp used on the underside of its barrel changed, both in overall size and font style.  Initial production examples left space just beyond the front sight to accommodate additional markings. Later pieces lack this feature.

Through the substantial research and assistance of Santa Barbara collectors world-wide, it is now clear that two revolvers known have very close serial numbers, 01046 and 01048. The numbers are stamped on the left side of the frame underneath the wooden grip plates. No additional numbers appear on the cylinder or barrel. The reason for stamping numbers where they couldn't be seen for ready identification remains unknown. Did the firm realize after delivering the first orders that the placement of the serial number was impractical?  Was there a need to comply in this way with some legal requirement? Or were regulations perhaps even furthered in this way? I exclude a special series, prototype, or the like from the possibilities, because our number sample now exceeds 400. That would be disproportionate for a unique "one-off."

The serial number was framed by a "X" stamped fore and aft, probably to prevent later alteration or to make modification difficult

Sensational is the discovery of the serial number 01048 at an American auction house in the year 08/2019. The number was thus awarded twice! A mistake? Is this the turning point of serial numbers from frame to barrel? Thus, these two revolvers have advanced to a unique. 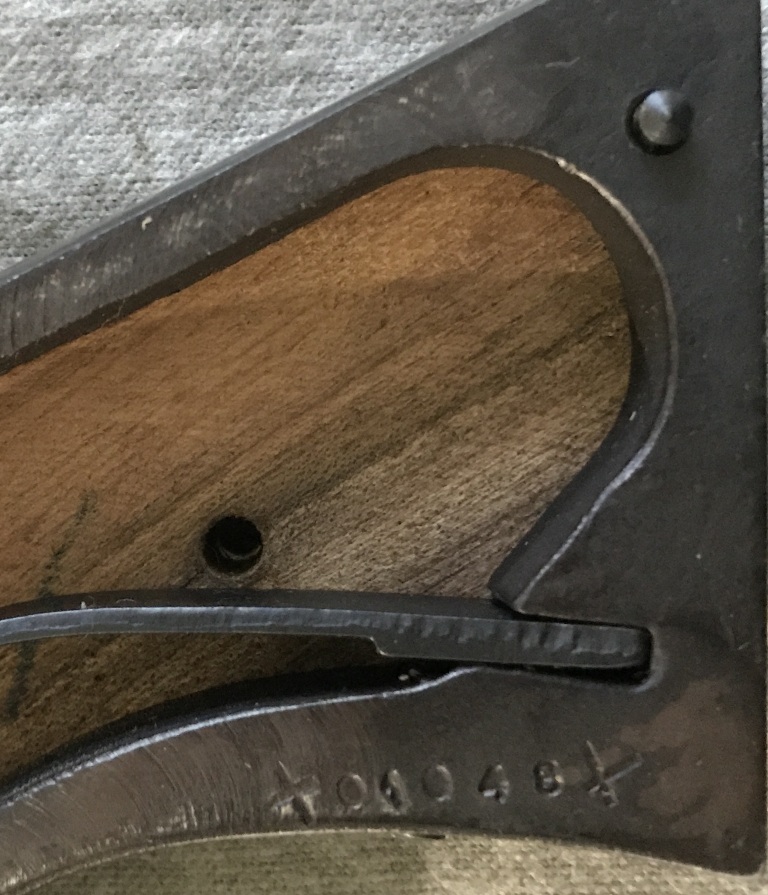 The latest information reveals the existence now of four variations of barrel markings. Their presence raises questions. For example, were Santa Barbara armorers uncertain about the series beginning, and whether the serial number should appear stamped on the barrel or remain concealed under the grip stocks?  What is the reason for the anomalies?  Which number block was changed?
While the serial number first appeared stamped on the grip frame, the manufacture information ran along the barrel, at the right side, just in front of the cylinder.

In the years the designations were arranged in different sizes. There are no explansions yet.

Another dealer stamp appears on the left side of the frame, a “Hofmann H” in a circle. Helmut Hofmann numbers among the various German forms who imported the Santa Barbara revolver in the 1970’s. 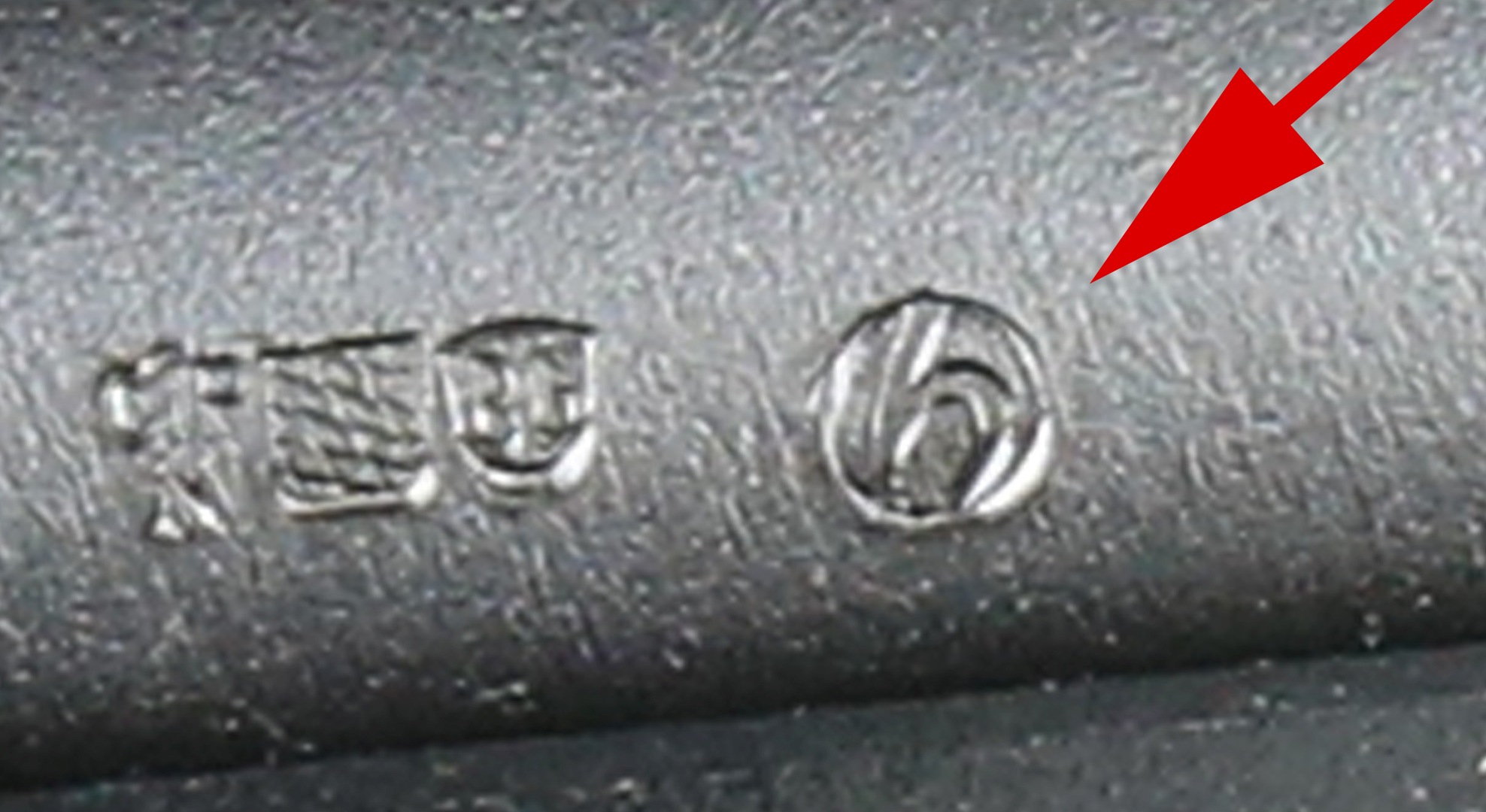 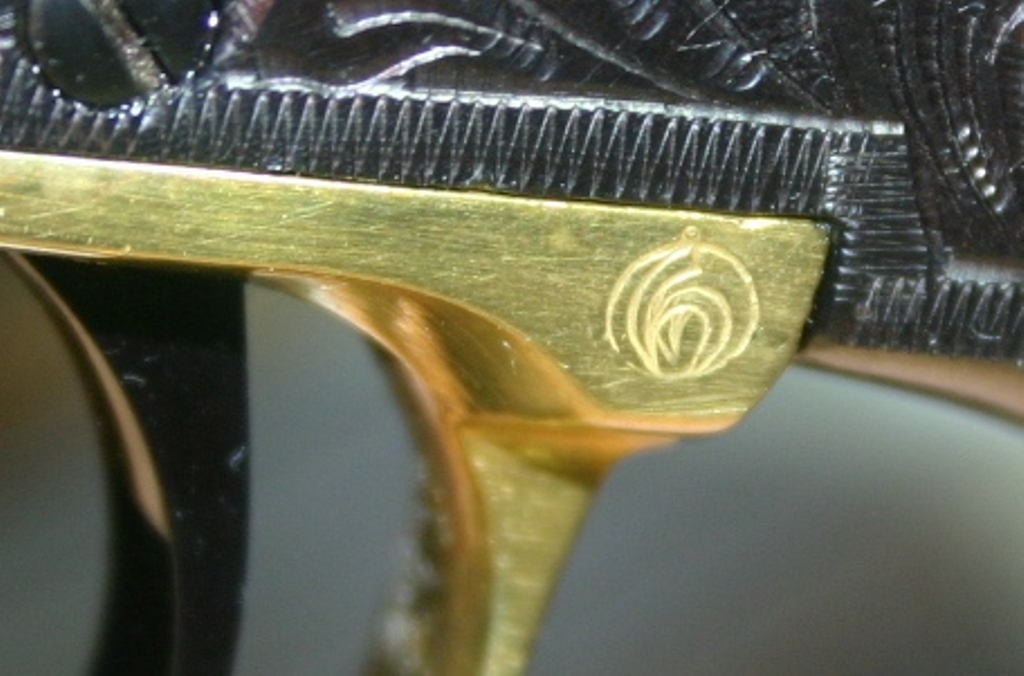 The hunting and sport arms dealer Hege offered the Santa Barbara for sale. New legal regulations in Germany required dealers  there to stamp the imported arms with their individual trademark.

Werner H. Withum - WIKE - Replica Specialist
Recently, a revolver has surfaced finally from the inventory of the first German distributor of the Santa Barbara. It remains unclear why Withum sold the beautiful arms for only a short while. But his old trademark proves he led the early trade.

Proof Mark additional?
Why must arms be carried to the Proof Office, when they already have an official, Spanish proof mark? After the European Treaty (Maastricht 1992?) the CIP (commission internationale permanente) took over arms testing for member states, including Spanish products. Can intimidation be the reason? Many marksmen even today are forced by so-called experts to allow their weapons to be test fired again, although this is unnecessary.
The nickel plated Santa Barbara was tested again in Bavaria, in 1975, although it bore all the necessary Spanish proof marks. The serial number shows the piece was made before 1975.

Our friendly neighbors from Spain have reported through the Proof Office in Eibar that the mark confirms a black powder proofing test. However, they don't know why additional testing was made afterwards.

As with the Plain Jane, we find the same marking and text on the Type 2.
According to information from Eibar, the combination B*2 indicates the year 1982. But this allows no conclusion to be made about the year of production. That was about ten years earlier.

Black Powder Only was previosly intended for Italians, why sporadically now these on the Spanish Revolvers can only be owed to the scare makers.

The bullet points of 1982 can also be found on the handle bottom again. it was not always stamped in the same place. Of course, they are the least notice able on the handler bottom. 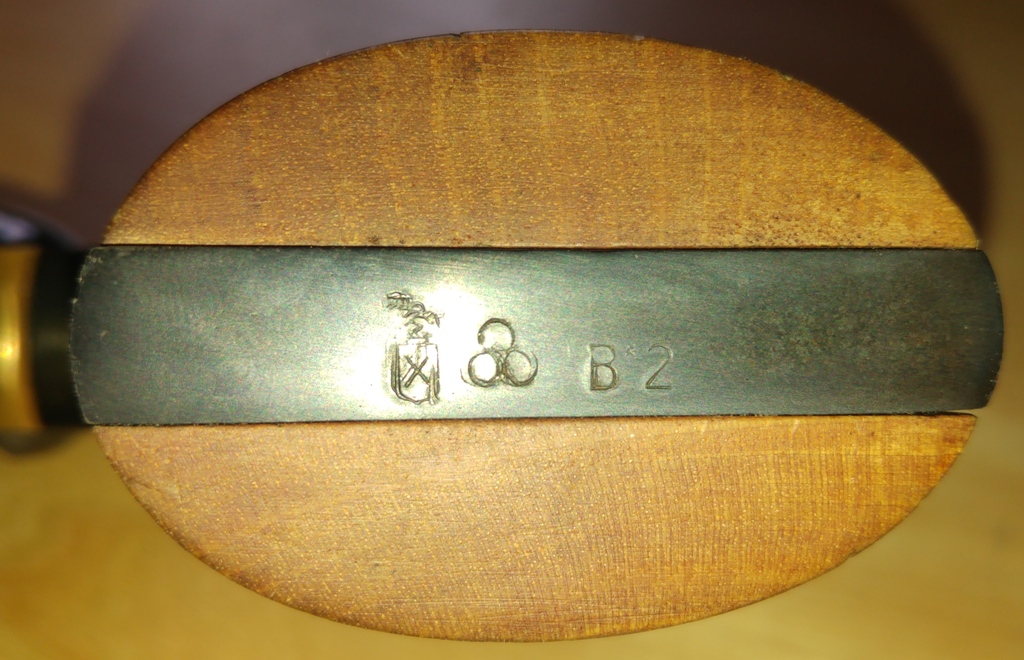 C.I.P. - Member States
Extract of the internationally recognized arms proof mark of the C. I. P. - Member states. (Permanent international commission for handgun testing) Germany agreed with these countries to the mutual recognition of the proof mark.

Disabled weapons are known from the museum or uniform collector scene.Here is the first Santa Basrbara with French zertificate, whereby the disarmament has been officially confirmed and documented 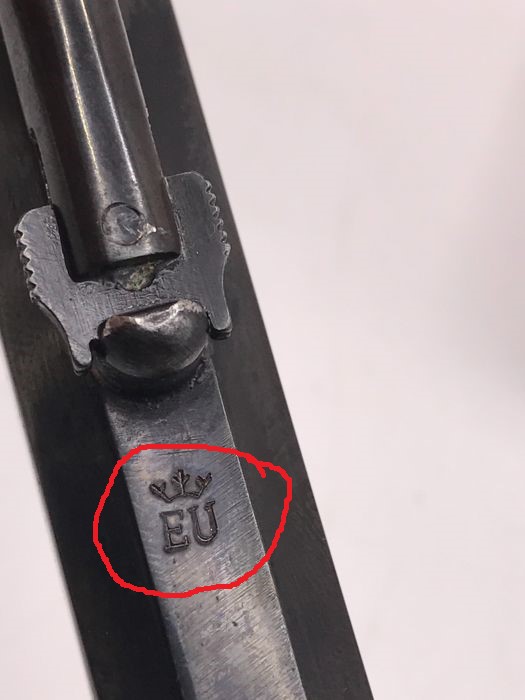 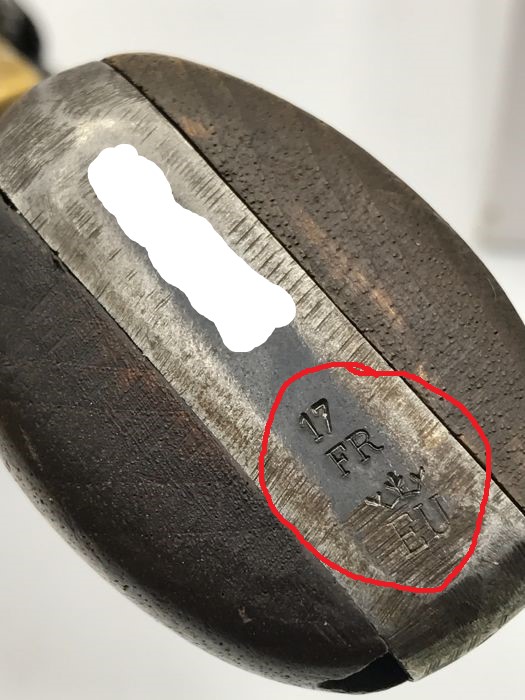 Which dealer used this stamp on the barrel screw-end?

This import stamp appears on an engraved

Further puzzles are posed by an N and a 4, each deeply struck on the right side of the grip frame 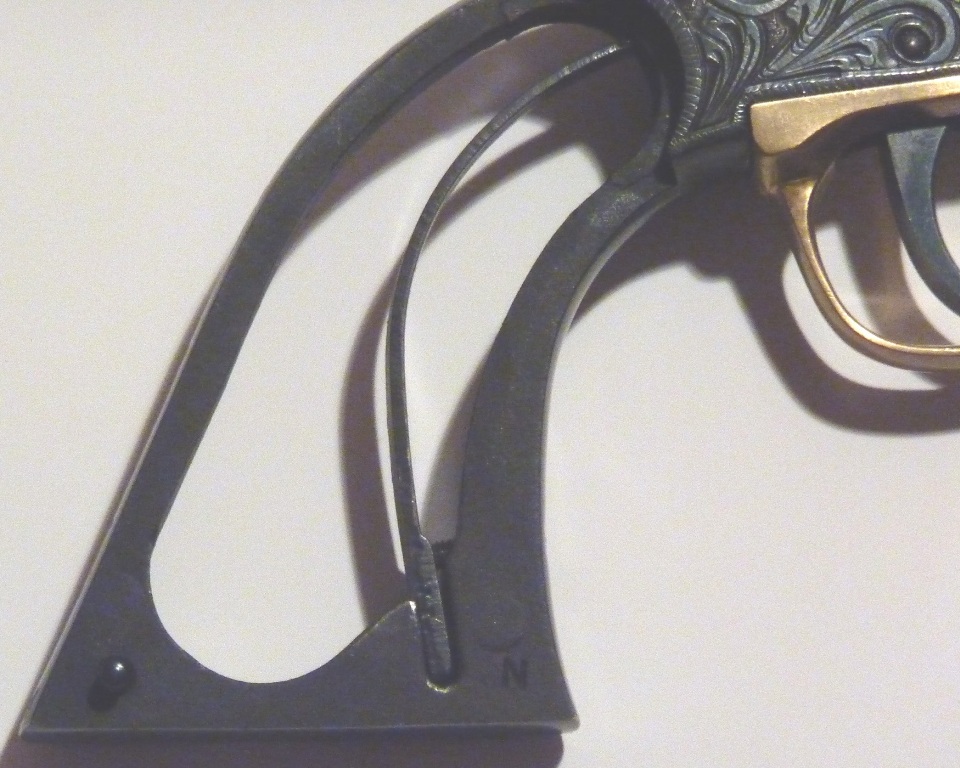 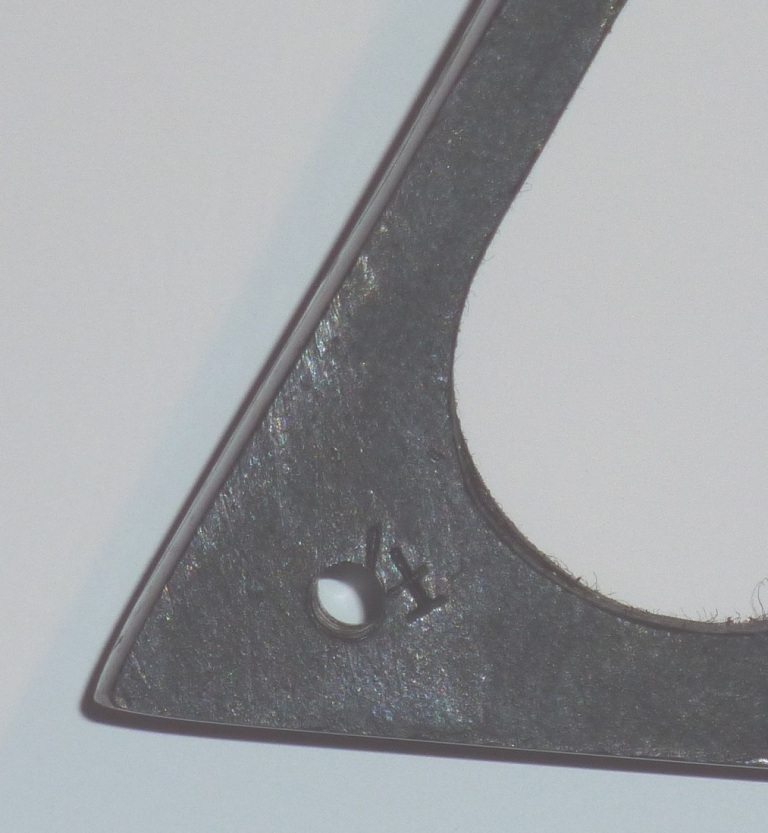 Were the numbers and letters arranged as a personal identifier or as an engraving instruction?
Who was the 1, 4,S  or N? 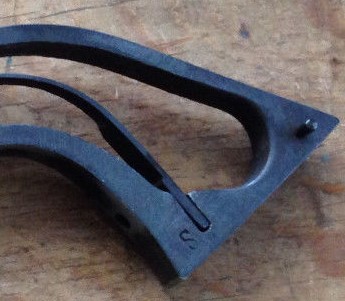 Unfortunaly our spanish friend are not so cooperative, so many answers remain open. Todocolession is an internet platform where you can find a lot of Santa Barbara. I hope I can quickly delete the phase "not so cooperativ" and fill it with facts.

Here is a 'Made in .....'  designation set directly above the loading lever. 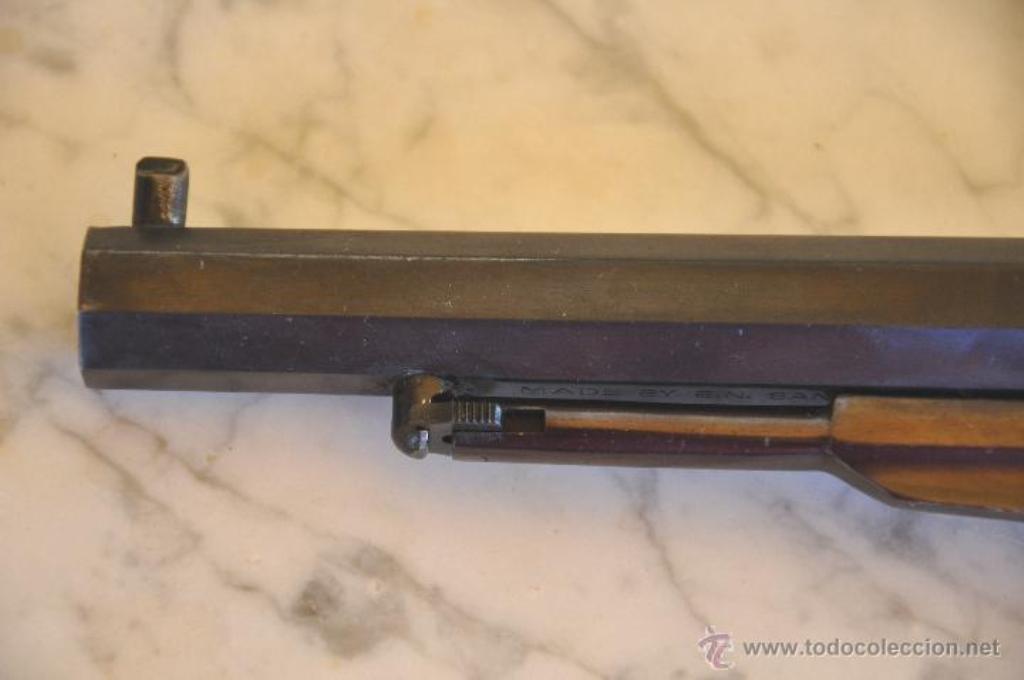