Hollywood’s Pale Rider (1985) tried in vain to teach us how to re-load a revolver quickly, by exchanging the expended cylinder for a loaded one. But this neat cinematic idea fails due to the limitations of the then-current arms technology.

The quantum jump to efficient breech-loading came in 1855 with a patent by Rollin White, a gunsmith for the Colt Company until 1856.  He bored though the revolver cylinder to accommodate the new metallic cartridge.  This design improvement made reloading simpler and faster than before. The first metallic cartridges featured rim-fire detonation, later improvements used center-fire primers.

Two American firms pioneered in the use of metallic cartridges in large caliber Army revolvers.   Upon expiration of the Colt revolver patent in 1856, Smith & Wesson bought from White exclusive rights to use his patent #00012648.  The next year, the firm began producing the first small caliber revolvers chambered for the new ammunition. The outbreak of the Civil War in 1861 popularized its .22 and .32 caliber pistols as private-purchase arms among Union soldiers.  After the war, in 1870, the firm introduced the Model No. 3, a top-break six-shooter in .44 caliber rim fire. An improved second model followed two years later.

Meanwhile, in 1868, the Remington Arms Company bought from Smith & Wesson permission to use the White patent.  However, Remington executives failed to exploit their new market potential.  Instead, they waited almost seven years to introduce the new ammunition with the Model 1875 Single Action Army revolver. Chambered for .44 caliber center fire, the arm came too late to compete with the Colt counterpart, and the Army bought none from Remington.

All the while, Colt executives refused to buy rights to the White patent. Instead they tried to circumvent it, beginning in 1869, with the Thuer conversion.  The attempt met little success, but examples surviving from the 5,000 made form a prized category for Colt collectors.

When the White patent expired in 1870, the Colt firm rushed into the market for large caliber metallic cartridge revolvers.  Three new .44 caliber models soon helped Colt lead the market:  the Open Top in 1872, the Single Action Army in 1872, and the Richards conversions in 1873.

President Grant refused to approve a patent extension for Rollin White in 1870.  Ordnance Chief Alexander Dyer had accused White of “embarrassing” Army wartime arms production through his selfish patent. The charge lacks support in the current literature, however.

Here the loading lever is clear. The cylinder and hammer have been changed.

Nowadays, we need not think about the technical specifications or precise fit. For modern machinery produces tools exact to 1/100 inch. So a conversion kit comes out of the box needing no further adjustment. Manufacturers such as Kirst or Taylor & Company offer kits for various revolvers, but not for the Santa Barbara.  The most important conversion component is the frame. It remains the same and as such is suitable for use with black powder only.  The misuse of nitro ammunition with this part can cause serious and even fatal accidents. This is especially true when shooters mix together weak and strong cartridges. 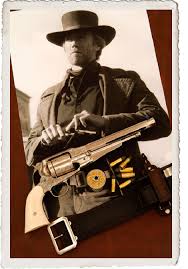 Had the Pale Rider possessed a cylinder fitted for metallic cartridges, then reloading would have been faster by hand than by a tricky exchange of cylinders.  But then the process would lack the “cool” it seems to have in the movie. 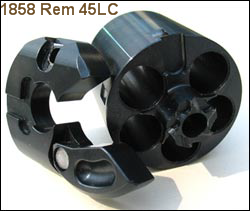 The Kirst converters sometimes must be adjusted for length.

If a customer buys the ejector mechanism with the initial order, he can save time later waiting at the gunsmith shop. Plus postage is paid just once.  A good conversion kit today can cost up to $450.

Available also in .22 caliber long rifle, but then the arm no longer looks quite original. Spare material and pocket book.

These kits are made for use with the Italian competitors. Their availability in Germany today remains uncertain.