Current research shows the Santa Barbara “New Model Army” became known in Germany initially through an article published by Mr. Foerster in the German Arms Journal, (DWJ, no. 9, September 1972). The pistol was first marketed there by the then sole importer, the firm Werner H. Withum, of Kressbronn on Lake Constance. One of the first advertisements for the revolver had appeared earlier in the August 1971 issue of the Journal. 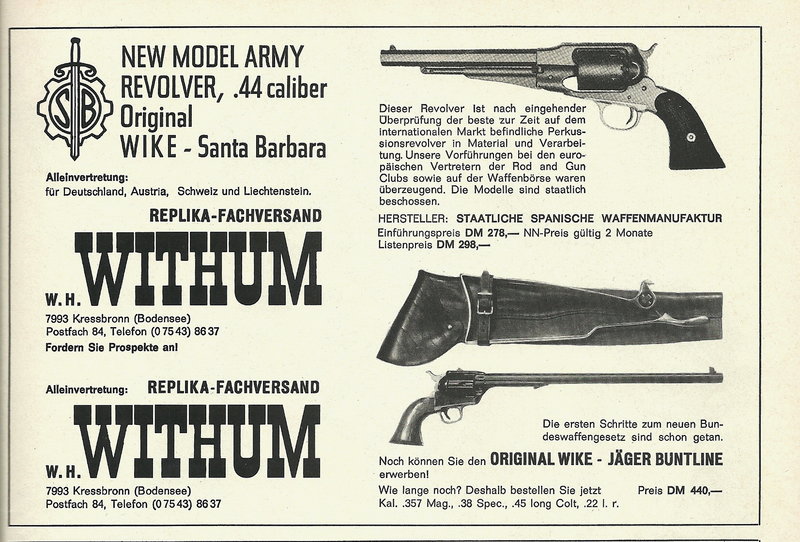 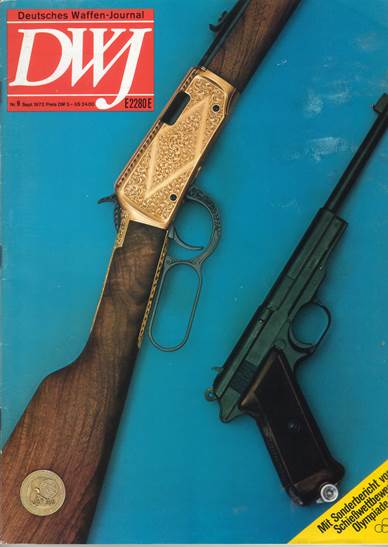 The following original text, courtesy of the German Arms Journal, relays once again the fascination which the sensational revolver must have caused. The advertisement appeared without quoting specific prices.

Page 1 of the article

Page 2 of the article 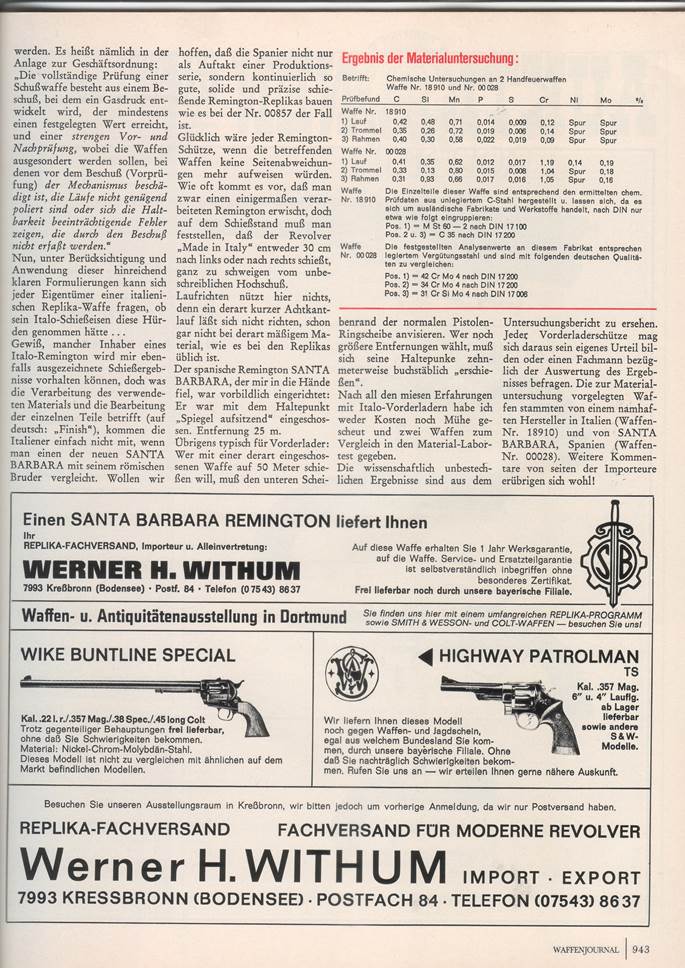 The dealer Paul Jacobi made an offer in 1972

Soon thereafter, German law regulating the purchase of firearms changed on January 1, 1973.  Henceforth, a prospective buyer needed to secure a government permit to purchase a firearm.  But still the question remained then, whether a muzzle-loading revolver also required a permit under the new law.

Six months later, the Spanish manufacture opened its own storefront in the retail market. The firm showcased its debut advertisement in the German Arms Journal (DWJ) in mid-1973.  (At the time, a Remington of lesser quality could be obtained readily for 198 DM.)

Following these developments, the Withum company placed no further advertisements for the Spanish revolver. Perhaps prior arrangements with the manufacturer had fallen through?  The successor company has no information available today about the matter.

The June 1973 the Bärbel Harlos company published a small advertisement in the German Arms Journal (DWJ issue No. 6), offering the Santa Barbara Remington for 298 DM.   Unfortunately, attempts to make contact with the firm have failed. In the early Seventies, times were tough for most everyone, buyers and sellers alike. That seems clear from the increased number of ads offering for sale single-shot black powder rifles and pistols. The purchase of revolvers still remained unrestricted then, at least according to the Harlos advertisement.

In July 1973, Waffenhaus Stanglmeier offered for sale the „new star of class revolvers.” The price for the standard model was 249.50 DM and the engraved model at 398 DM.

It is interesting to follow the marketing of these arms as documented in the advertising abroad, and especially in America.  Harlos continued in August 1973 to offer the standard model for 298 DM and the engraved version at 378 DM. These prices undercut Stanglmeier quotes by significant amounts. Two months later, in October 1973, Harlos cut its retail prices of the Santa Barbara standard model to 245 DM and the engraved version to 298 DM.   These prices were the most favorable available at the time.  A prime competitor in the replica arms market , Hebsacker GmbH of Schwäbisch Hall, held back on adopting the Santa Barbara, preferring instead to sell many revolvers from the production runs of Hege Uberti.  It seems other dealers either lacked sufficient inventory from Spain or otherwise failed to offer the new Remington replica.  For the time being, B. Harlos remained its sole supplier to the retail market.

The Christmas business in 1973 got swept clean for every merchant, at least as regards the Santa Barbara. Did Spain have a supply shortage or were sanctions still undisclosed in place at the time? Is that a reason why production of this arms totaled only some 16,000 examples worldwide? Were reports about changes slated for February 1974 to permit requirements a sales strategy circulated to cause panic among prospective buyers?  Again and again, references appear in the arm literature about forthcoming legal restrictions. 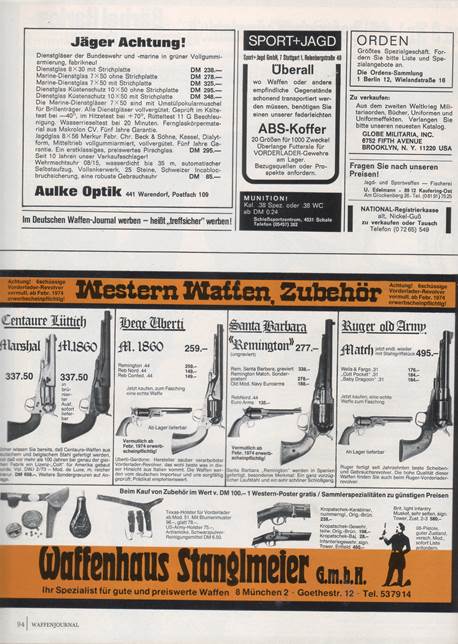 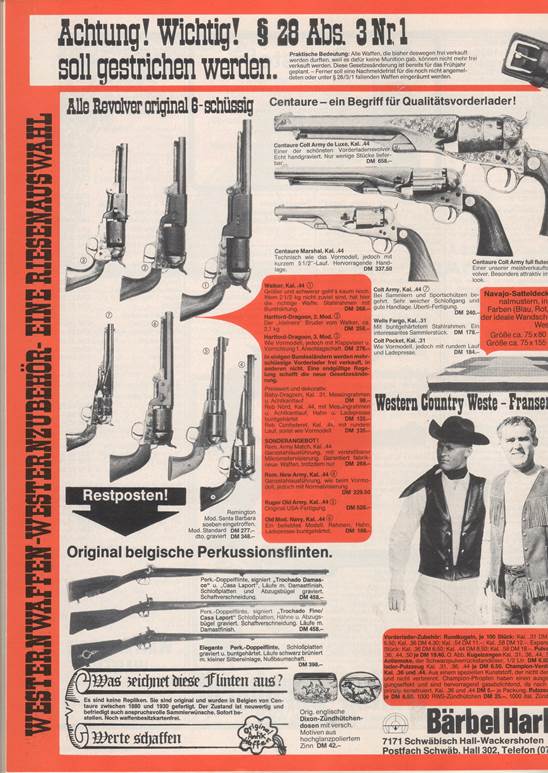 Then seven months later, in November 1974, the firm Frankonia  Jagd began offering the Santa Barbara for 298 DM. The advertisement noted again possible changes ahead for the laws regulating firearm purchases.

Bärbel Harlos meanwhile launched advertising which soon returned the company to the position of industry leader.  It seems that dealers got deliveries made on contingency, but no fulfillment remained on-going.  By 1975, the market appeared so saturated that delivery shortages no longer occurred. Now the engraved Santa Barbara fetched a hefty 498 DM. 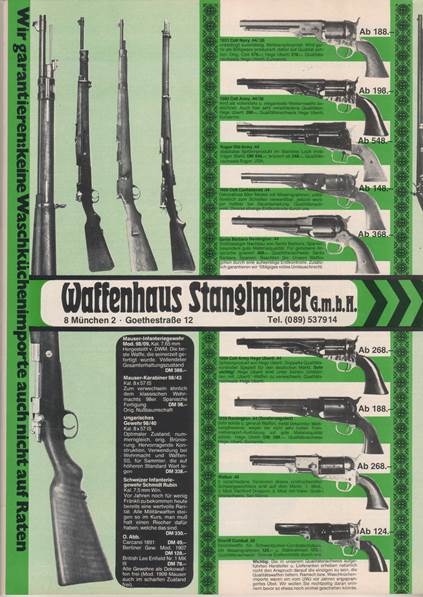 In October the engraved model cost 498 DM at Stanglmeier‘s.

trade, offering the revolver for 386 DM.

Unfortunately, here end my documents covering the sale of the Santa Barbara revolver. But I would be interested to learn what advertisement brought the last Spanish-produced Santa Barbara into print.  Thus, the relevant history remains open……

Advertising in the United States

Naturally, advertising supported Santa Barbara sales in other countries, including the United States.  Both the standard and engraved models were advertised in arms publications there. Connecticut Valley Arms Inc. (CVA) was an important supplier of the Santa Barbara revolver to the American market.

Unfortunately, CVA cannot confirm today that it had acted as the general importer of this revolver during the years in question. Noteworthy in its advertisements is the absence of price quotes, although the well-illustrated ads featured accessories, certificates of guarantee, and exploded drawings of the various components.

Through the application of modern technology it may be possible to determine the serial numbers shown on the guarantee certificates, so a lucky owner will know he has a revolver straight out of the advertising brochure. 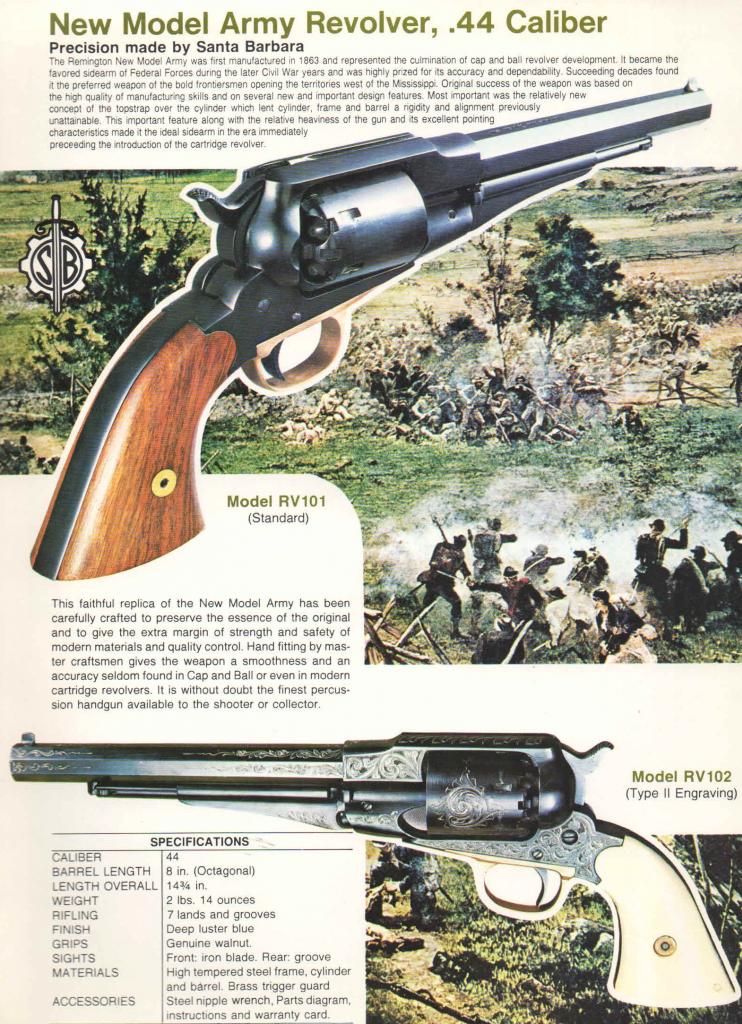 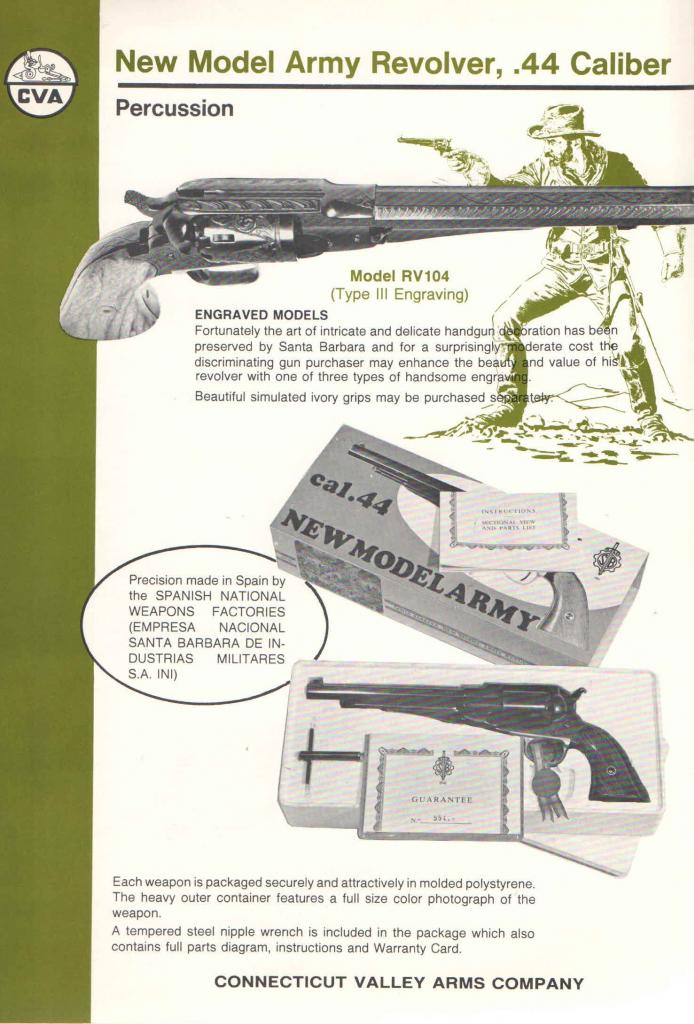 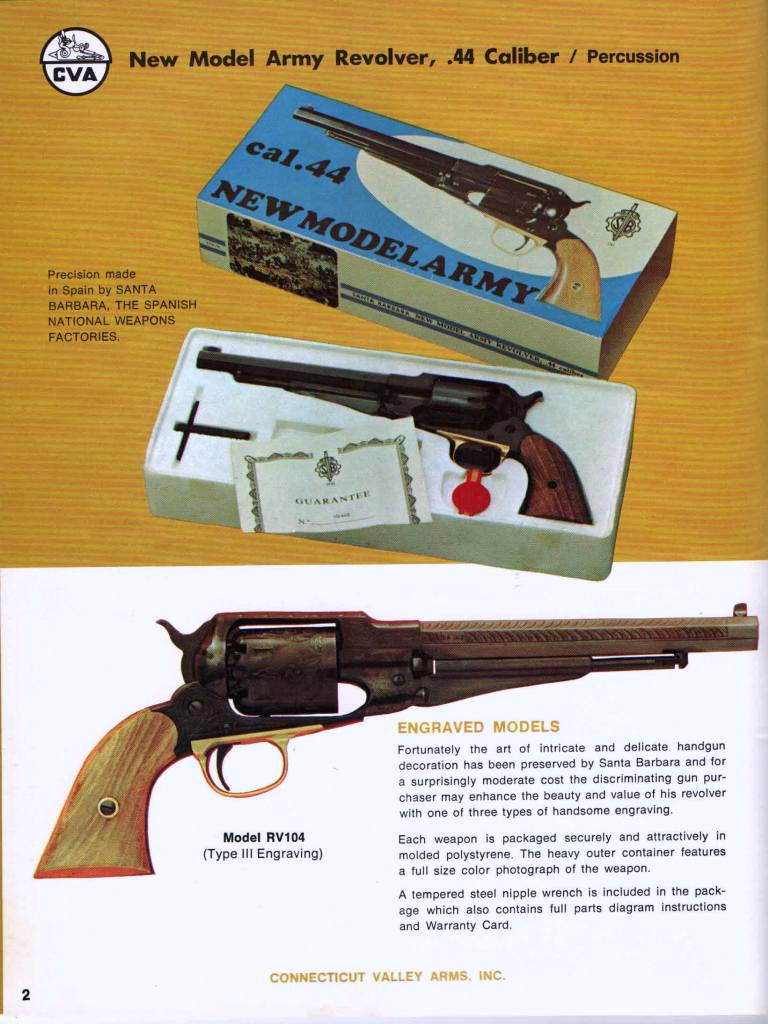 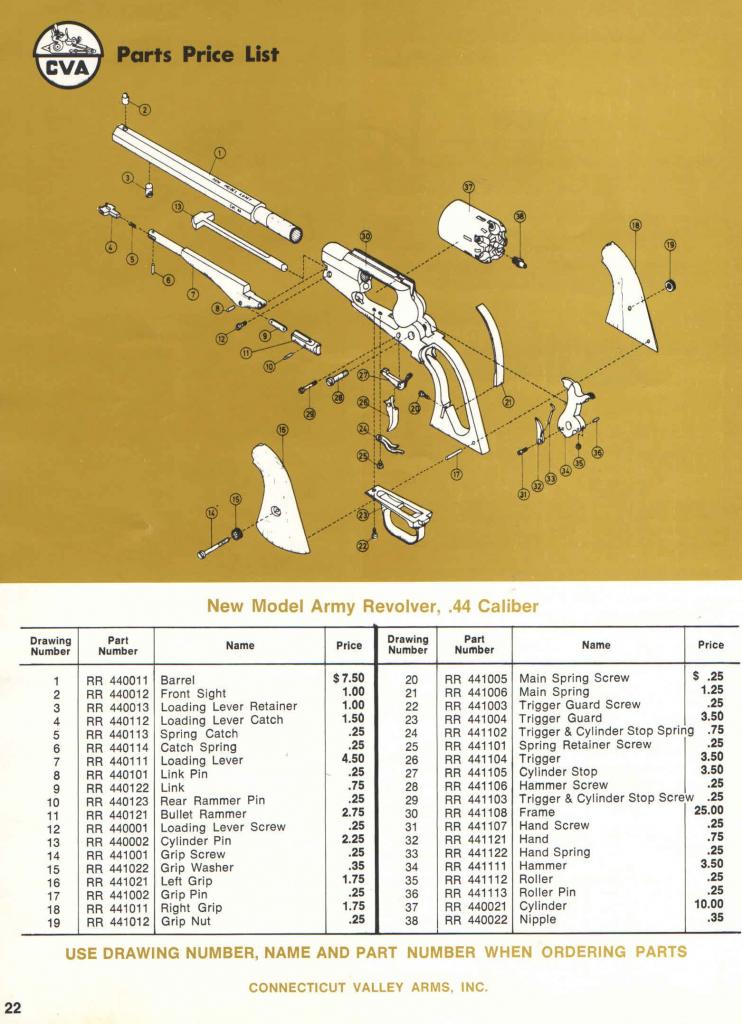