One of the most beautiful collector pieces is the two-tone engraved New Model Army, made in Spain.

A brilliant silver finish accents the frame, hammer, and loading lever assembly, while the remainder of the revolver—the barrel, cylinder, and trigger-- shows a deep black finish. The grip plates shown here are oiled and the trigger guard is brass. The screws are also black.

The cylinder appears rather plain in comparison to other engraver arts. One might assume it shows a feather with the playing card color PIK.  Were the cylinders interchangeable?

For the first time, the engraving included the loading lever as well as the base of the trigger guard.

This nice example is shown fitted in an English wooden display case, compete with Italian powder flask and bullet mold.

Individually engraved or delivered by the factory?

In 2011, this splendid Santa Barbara was offered by the renowned Munich auction house "Herman Historica" www.Hermann-Historica.com. The gold inlay looks like a stylized scorpion. The engraving itself strongly resembles that of Type 3, but with additional embellishments ordered by either the client, the artist, or factory guideline. Another revolver exists bearing a stylized scorpion.  Are these arms perhaps examples of a deluxe version of the Santa Barbara? 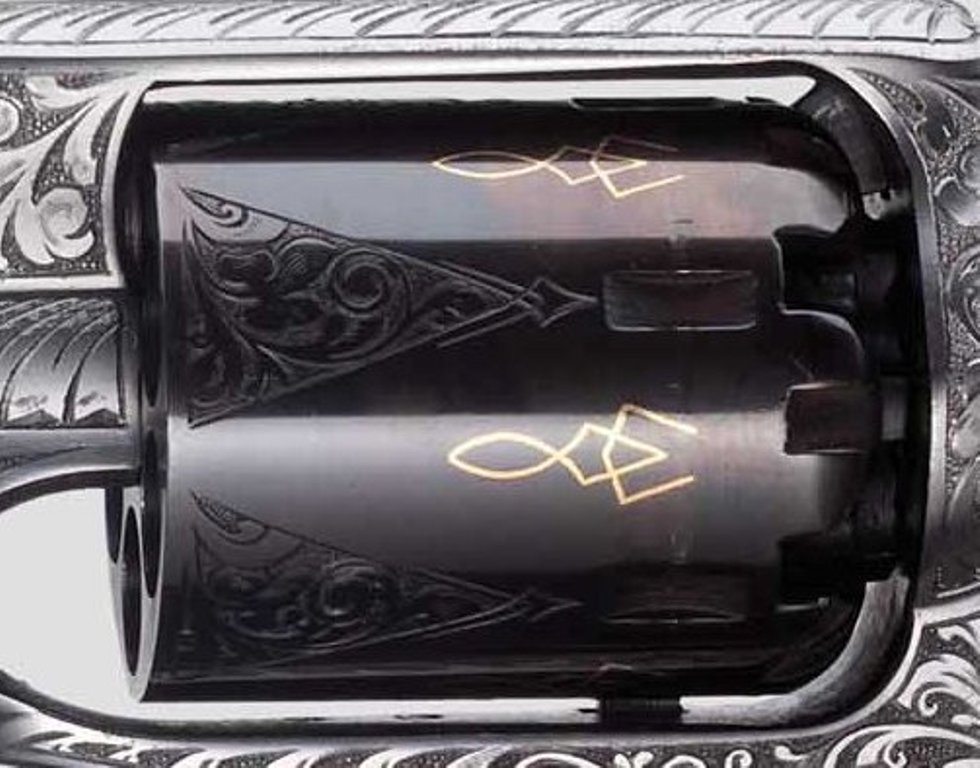 When the artist-engraver has a free hand or he can realize a customer's desire, then the splendid results for the observer are priceless. Also in this special case, the best pieces were engraved as a matched pair, but could not have been intended as such by the company. For then the serial numbers would have run in order, not show a gap of almost 3,000 pieces. Also, these beautiful revolvers date from different years.